Today is a holiday!

In Chinese astrology, 2012 is the year of the water dragon. I remember when we went to see a bubble show last June, the dragon was main character of the show. The setting looked like we were underwater. So, this might be the water dragon.

I have quite an affinity for dragons. Most of my classmates were born in the year of the dragon. (Yes, they are turning 24 this year.  😉 )  My father was also born in the year of the dragon.  One of my favorite characters in ‘Game of Thrones’ had dragons. (I just have to include that. I’m trying to finish the 4th book.) Dragons are fierce mythical creatures. They are interesting and they are supposed to be lucky. I am only annoyed at one thing: I was born a year late. Thus, I am a snake. Not a fun creature. I feel like Harry Potter. The sorting hat thinks he should be a Slytherin but he chose to be a Gryffindor. Chinese astrology only thinks I am snake but I am really a dragon. Pak!

Anyway, do not take me too seriously. I am not into astrology. I do not know if this year is lucky for snakes like me. One thing is for sure: This is going to be a great year. I say so! I was reading my blog feed yesterday and I came across an image posted by Bee.  The image was taken from a list of cool pictures of 2011. 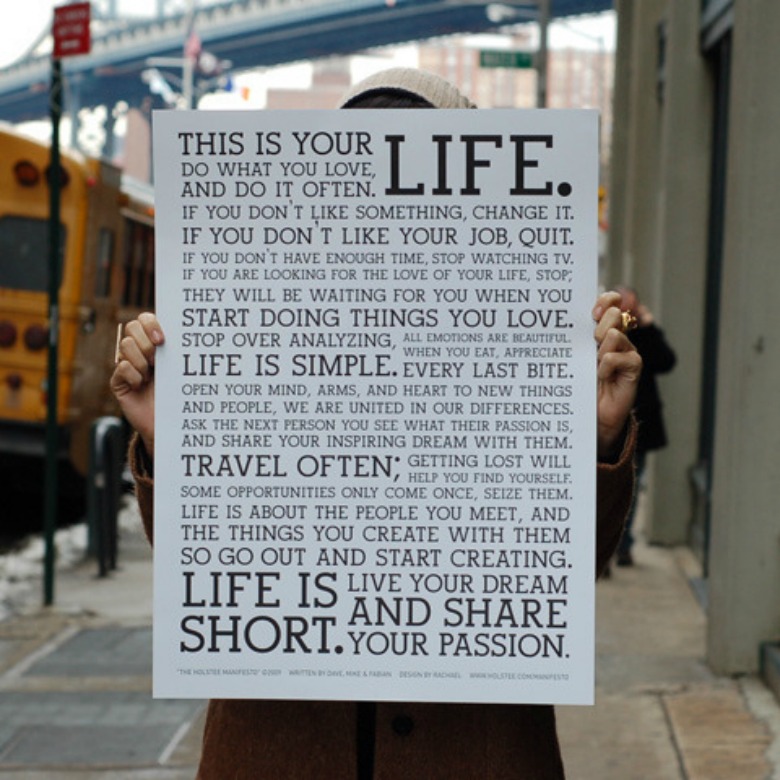 When I read this, I connected with the message. In my head, I was saying “So True!” I felt like it was me carrying the poster. I wish I wrote this one and created the cool graphics. ( I love the font and how it was put together).

I love to travel. ( I think I wrote this sentence several times before. )  It is not surprising that I follow Susan Calo-Medina on Twitter and Facebook. Imagine the thrill (kilig) I had when I saw this on my twitter alerts.  She’s following me! (Her or whoever is the admin of Travel Time’s twitter account. )

Actually, I have seen her in person.  There was a time I saw her jog in our street when she was in Butuan. Her brothers live near our place. She’s a Butuanon, by the way. One time, I saw her in church. I was young then. I knew she has this travel show on TV but I only started watching the show three years ago.

Anyway, this video was shared by Susan Calo-Medina  on Twitter and Facebook. The idea of being a travel writer appeals to me. Check out the video:

I want to grow old gracefully.

I want to be like her someday. What a cool woman! Cheers, Aunt Carol!

I am not even familiar with Usher’s songs. At 34, I can’t pull this off. I already lost my dancing skills the minute I stepped into puberty.  I was a very shy child, yet I was a confident dancer.  I did not even hesitate to say yes when I was asked to dance solo in one Christmas program in school.

Kung Fu pose? I don't even have ballet shoes on.

If you ask me to dance now, I’d say no in a heartbeat. No amount of cajoling, pushing or pulling can convince me to dance or sing in front of people. Maybe it is hereditary. I showed the Aunt Carol video to my aunt. Her high school batch will be celebrating their golden jubilee year this May. It might be fun if they dance to Usher like Aunt Carol. Their batch will be required to perform a number.  She said they will dance but she’ll be in the back row. ()

Aunt Carol got me to thinking about growing old. I do not want to become that grumpy old lady who keeps a cat (or dog) but shouts at kids. I want to be the cool aunt who tells stories about the 90’s (and the start of millennium 😉 ). I hope I will still have my wits. I hope I will still be open to listening new music and learning new technology. I don’t want to lose my childlike wonder. I still want to be amazed even with the little things that I see everyday. I hope I will never say “Been there. Done that” on things that are worthwhile even if I have been there and done those things.

I remember a recent conversation with my aunt, she was reading a news item:

Thanks, Tita, for reminding me of my youth. 😉

A friend shared this TED Talk video. I love the child’s perspective and the old man’s wisdom.

Life is short. I want to live my life full of gratitude.

This is my futile attempt to create an artwork in my uber-cool planner. In time, this will be filled with doodles.

I finally shared this blog to friends. (Although, some friends found their way to my blog.) It took some time to share my blog to everyone because I’m shy. I am not shy when sharing blog posts to strangers. I would happily link up my posts during online discussions. With friends, I fear criticisms. Unfavorable replies hurt when they come from people whose opinions matter me.  I just have to conquer this fear.  Fear feeds worries and my life’s goal is to live with less worries. (Correct grammar should have been “fewer worries”.) If I was brave enough to travel with Sendong even after I saw the damage and traveled again through Lanao del Norte at night, whatever fear (of criticisms) I had was immaterial. I had to get over this hurdle and move on. All it took was one wall post on Facebook. This blog post is my way of saying thanks to my friends for being kind. Don’t worry I won’t spill our secrets. 😉

I love to travel. I dedicated my second blog post of the year to Philippine travel.

Last week, the Department of Tourism  (DOT) tapped social media to launch its tourism campaign. Launch date was scheduled on 10 a.m of January 6. Days leading to the launch date, the DOT hyped up the hashtag #1forFUN on twitter. Prominent bloggers met with Tourism Secretary Mon Jimenez to discuss the campaign.  Mr. Jimenez even opened his own twitter account (@MonJQuotes).

I got curious. When January 6 came, I was on Twitter waiting for a word on the launch.  The official tag line was finally announced. Drum roll please. “It’s more fun in the Philippines”. The official website was also launched.

The campaign had some constructive criticisms, namely:

The campaign was received well.  The hashtag #itsmorefuninthephilippines became a trending topic on Twitter worldwide. Even acclaimed writer, Neil Gaiman

, joined in the fun.

As of this writing, the mood meter in Maria Ressa’s Rappler.com showed  64% of readers are happy with the campaign and 26% are inspired.

I was a bit disappointed when I first learned of the new tagline. I have to agree with criticism number 1. I like Anna Oposa‘s suggestion better. It rebuffs all the criticisms raised.

Despite my initial feeling about the campaign, the FUN started pouring in. I had to join in. On twitter, I tweeted about why Philippines is fun.  Mon Jimenez might really be the ad genius that people say he is. The end of work week was the perfect time to launch the campaign because by the time weekend arrived, people had the time to create memes.

Taking the cue from the three photos from the official website, people started creating their own campaign images.

I made my own set of photos from my travels and uploaded them on Facebook. I got positive responses from friends.

Anton Diaz of Our Awesome Planet has the best collection of memes made by people who joined the fun. I sound a bit biased. It’s because the two photos I shared to Anton ended up in the page. Check them out here.

Want to join the fun?

Download and install the Harabara font. Don’t worry it is free! Check your Philippine travel photos and think of a nice caption. Use your favorite photo-editing software to create the meme.  I use Photoscape.